First “Provincial Disaster Risk Plan (IRAP)” of our country was introduced to the public during a ceremony participated by the Minister of Interior Affairs Mr. Süleyman Soylu, Deputy Minister of Interior Affairs Mr. İsmail Çataklı and the Head of Disaster and Emergency Management Authority (AFAD) Dr. Mehmet Güllüoğlu. The ceremony was held in the southeastern city of Kahramanmaraş which was elected as the pilot city for IRAP. Kahramanmaraş IRAP will establish an organization at then city level in order to prevent disasters and reduce their harms.

AFAD has been organizing activities as a part of “Disaster Preparedness Week” held between August 17 and 21 on the anniversary of the August 17 earthquake. Provincial Risk Reduction plan which will be a milestone in Turkey’s disaster management was introduced to public within the framework of this special week. First IRAP was completed in Kahramanmaraş which was elected as the pilot city.

Disaster Management Based on Written Strategy and Plans

Minister Soylu said that they will prioritize disaster management based on written strategy and plans just like they did in other issues regarding security in the new term and went on to say that:

"Today, we have traffic safety policy document. We have adaptation document in immigration management. Likewise, we have similar strategic documents concerning drug trafficking and security. In a similar way, we have a plan namely “Turkey disaster management strategy document and action plan” which is a main document of disaster management. Under that main document, there is TARAP, the Turkey Disaster Risk Reduction Plan which concerns measures that will be taken before disasters.

Stating that disaster management turned into a totally new character in public management in Turkey in the last 21 years, Soylu said, “This plan is a road map which was carefully prepared in details. It detects local risks and defines targets and actions aiming at reducing these risks. It is not a report that will be prepared only once; it will be a live and dynamic work. This plan will be updated regularly. Combination of provincial disaster risk plans will form the Turkey Disaster Risk Reduction Plan.”

TARAP and IRAP will Form Resistant Society and Cities

Head of AFAD Dr. Mehmet Güllüoğlu made an important speech during the ceremony. Noting that they have seen the output of a year-long effort, Güllüoğlu said, “We are not only working in an effort to heal the wounds but reduce disaster risks. After the implementation of Turkey Disaster Risk Reduction Plan (TARAP) and provincial risk plans, there will be a decrease in the resources allocated for activities, thus they will allow the establishment of more resistant cities and safer settlement areas. We also believe that they will make contribution to sustainable development of the country.”

Dr. Güllüoğlu explained that they have adopted a large participatory approach in TARAP and scenarios show differences according to the characteristics of cities in IRAP adding that, “We are working in an effort to form resistant societies and safer living environments, reduce losses that may occur due to disasters. In other words, we want to prevent damages and casualties due to disasters.”

Coordination between Agencies is a Must for Disaster Management

Head of AFAD underlined the importance of coordination between agencies adding that, “We learned from the previous disasters that we can manage disasters if we have coordination between agencies. Contribution of every agency and institution in a city is needed for successful disaster management. We believe that risk analysis plans will turn Turkey into a disaster resistant country and Turkey will stay safe during disasters.” 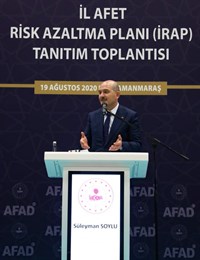 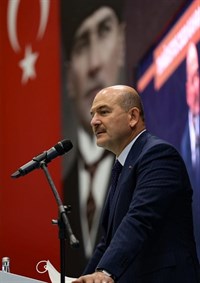