"Be Hope For Yemen” Aid Campaign

The Disaster and Emergency Management Authority (AFAD) initiated a humanitarian aid campaign for Yemen where people are starving to death.

Due to clashes that reached a peak since 2015 in Yemen, 22.2 million people out of a population of 29 million are desperate for help.

5 million children are fighting against an epidemic especially cholera due to malnutrition, lack of clean water, medicine and medical material shortage.

A child under five dies in every 10 minutes because of preventable reasons.

No children should die because of hunger, they should not become orphans due to lack of medicine...

AFAD has initiated an aid campaign in an effort to support the victims of remorseful humanitarian crisis in Yemen.

You can donate 10 TL (Turkish Mobile Operators only) if you write “Yemen” and sent it as message to 1866 or via AFAD web page.

Now, it is time to be the hope of the children and Yemen! ... In order to help a child to survive in every 10 minutes. 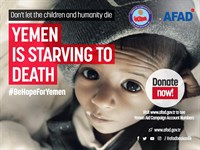