AFAD Gets Animals Off of the Hook

The Disaster and Emergency Management Authority (AFAD) teams from all parts of the country are offering a helping hand to animals which were trapped in rivers, wells, mountains, cliffs or rocky areas. Teams saved goats that could not descend from a cliff, cattle that could not get out from the river or a cat or a dog that fell in a well.

Cow Saved From the Aras River in Erzurum

A cow that was turned out to pasture in the Horasan region of the eastern province of Erzurum fell into the Aras River and was saved by AFAD Erzurum teams. The cow that fellin to the river and swam to a bushy area. AFAD teams saved the cow and took it with a boat and delivered the cow to its owner.

AFAD teams in the eastern province of Adıyaman used ropes to save the goat that strayed from the flock and was trapped in a cliff. Teams delivered the goat to the owner.

A goat that strayed from the flock and was trapped on a cliff. The shepherd and villagers who could not save the animal asked the help of the gendarme and AFAD. AFAD rescue teams in the eastern province of Muş worked for four hours and saved the goat and the villagers applauded the team.

The owner of the goat Şerafettin Özdemir said, “The shepherd turned out the goats, he told me that one of them was trapped in the cliff in the evening when they came back. I went there and realized that I could not rescue the goat. I informed the local authorities. May Allah bless them, AFAD came and rescued my goat.”

Cow that fell down the cliff saved in Amasya

A cow at the Saraycık meadow of the Amasya province fell from a cliff. AFAD Amasya teams rescued the animal two-hour long effort and delivered it to the owner.

A lost goat found after two days in Hakkari

A goat went missing in Biçer Neighborhood of the eastern province of Hakkari and local people searched for two days but could not find the goat. AFAD Hakkari teams climbed the cliff and saved the animal after a two and a half hours search. The owner of the goat thanked AFAD teams. 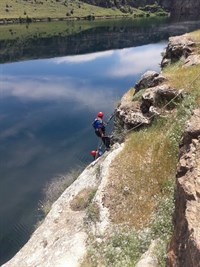