Minister of Interior Affairs Süleyman Soylu attended a ceremony organized by the Disaster and Emergency Management Authority (AFAD) on the occasion of the signing of the disaster training cooperation protocol with the Turkish Union of Chambers and Commodity Exchanges (TOBB), the Union of Turkish Agricultural Chambers (TZOB) and the Turkish Confederation of Employer Associations (TİSK).

Minister Soylu said during the ceremony that Turkey is located in a disaster zone and it is the duty of the government to provide good management during disasters adding that people used to ask where the government was during the rule of the previous administrations.

Soylu pointed out that the 1999 earthquake was a milestone for Turkey and AFAD undertook an important mission about measures that must be taken regarding natural disasters.

Noting that damaged houses were rebuilt quickly in the aftermath of the Van earthquake, Soylu stated, “Under the leadership of our President, our people did not ask where the government was when they suffered from the consequences of disasters.”

Minister Soylu said “provincial disaster risk plans” of 81 cities will be completed until the end of this year and AFAD and related organizations are working in an effort to increase their search and rescue capacities. He stated that the Ministry has developed AFAD application by using high technology which can be downloaded to cell phones which will help rescue teams to detect people who are trapped under debris and inform people about nearest assembly areas.

Reminding that the state responds to disasters promptly and never abandons victims, Soylu stressed that more than 8 thousand houses were built for earthquakes in Elazığ even before the first anniversary of the disaster and 24 thousand buildings will be completed until the end of this year.

Minister Soylu said that the Ministry plans to give disaster training to 51 million people and provided face to face training to 3 million and 691 people till now.

Aid to Arakan Muslims from Turkey

Defining AFAD as the helping hand of Turkey to the world, Soylu pointed out that Turkey had set up a field hospital for Arakan Muslims who were forced to migrate to Bangladesh.

Minister Soylu said that the hospital was heavily damaged after a fire in a refugee camp and went on to say that: 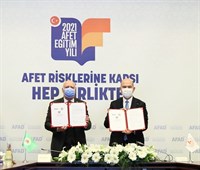